A..For its ability to connect people through laughter & shared experiences.. via the web

There’s a lot of hype surrounding the explosion of Pinterest. However, Pinterest has been around for quite some time.

Ben and Enid held a Pinterest event at Urbanic paper, a trendy stationery store in the heart of Venice Beach. While Pinterest was already popular, it didn’t have the attention it clearly has now. It was more of a “hip club” that the cool kids knew about, but certainly not the topic of conversation receiving as much media coverage as it’s receiving now.

Despite of the increasing public popularity of Pinterest and all the so-called “Social Media Experts”tweeting about its importance in marketing your brand online, many people still don’t get “it”.

“What the heck am I gonna do with Pinterest?”, they ask. 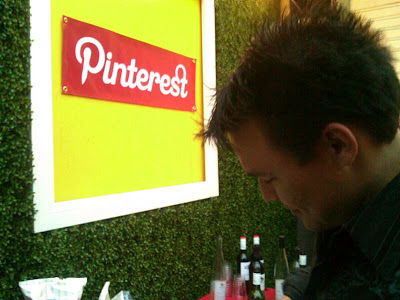 The answer is simple, really – via images, Pinterest is a medium which connects others to those with similar tastes and interests in a matter of seconds.

The beauty is being able to emotionally connect with anybody through a hilarious image that hits you right at the gut…Like this one:

While sometimes cheesy, and other times irrelevant, Pinterest is successful with encouraging people to connect and share their thoughts and sense of humor and sense of styles with one another.

Sometimes, people don’t necessarily want facts or ground-breaking news…Sometimes, levity and a powerful and demanding baby in a suit that reminds us of Don Corleone are all we need to remind us to laugh a little. Life’s too short to try too hard.

Thanks to Pinterest, we can all connect via random products and images efficiently.

And, at the end of the day, people just want to feel connected.

Congratulations to the Pinterest team for launching their vision successfully!!!

Please connect & network
by sharing what inspires YOU
on our Pinterest Group Boards!
Using Pinterest to visualize success…strategy…

Talk to us... Cancel reply

Till ChristmasDecember 25th, 2012
The big day is here.